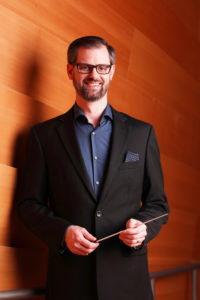 The 2019/20 season will be Seber’s fourth season with the orchestra. He joined as assistant conductor in 2016 with a one-year contract. In February 2017, the Symphony promoted Seber to associate conductor and signed a two-year extension through the current 2018/19 season.

“Jason Seber has proven himself to be a great asset to the Kansas City Symphony,” said Executive Director Frank Byrne. “Jason has an incredible work ethic and brings not only fine musicianship but also a positive spirit to every task. Our organization is better by having Jason on staff, and we are delighted to have him with us for two more years.”

Seber leads the Symphony’s Pops, Family and special concerts. He also conducts the John and Marny Sherman Education Series, which reaches more than 30,000 grade school students annually through programs such as Young People’s Concerts and KinderKonzerts. His other responsibilities include serving as cover conductor for the Classical Series, leading Classics Uncorked concerts and frequently conducting the popular Film + Live Orchestra concerts.

“I am thrilled to continue making music with the exceptional musicians of the Kansas City Symphony,” Seber said. “My three years so far in Kansas City have been full of incredibly rewarding performances. Not a week goes by where I don’t feel blessed to be able to work with such a talented team of musicians, staff and board. I have felt the genuine love and appreciation for all the Symphony does in our community. I am especially grateful to Michael Stern and Frank Byrne, who have been outstanding mentors and supporters along the journey. I hope to continue giving the best possible performances for our appreciative audiences and to continue building excellent relationships with everyone in our community, with an emphasis on providing more educational opportunities for middle school and high school students in Kansas City in the next two years.”

Music Director Michael Stern adds that Seber has been an excellent member of the Symphony family.

“Jason Seber has proven again and again why he is such an invaluable part of the Kansas City Symphony’s success,” Stern said. “By his many contributions as a conductor and an educator, by his programming, and by all of his community outreach and advocacy, he has earned a well-deserved and affectionate embrace from the musicians and staff, as well as the diverse audiences he serves so well. In everything we’re trying to accomplish together, I’m reminded daily how vital his passion is for both music and our musicians. I respect his musical insight and admire his professionalism, as I value his friendship. I am delighted he has agreed to extend his time here with us. He’s an important part of our success, and I very much look forward to the next seasons.”

Seber will make his Classical Series debut next season conducting Brahms’ Fourth and Bach’s Fantasia on October 25-27. Single tickets available now from $25. To purchase, call the Symphony Box Office at (816) 471-0400 or select seats at kcsymphony.org.

The Symphony will announce the 2019/20 Classics Uncorked concerts, which Seber programs and leads, in the coming weeks.

Previously, Seber served as the education and outreach conductor for the Louisville Orchestra where he led Family, Pops and special concerts and worked as cover conductor for the Classical series. Seber also was the music director of the Louisville Youth Orchestra for 11 seasons. He earned his master’s degree in orchestral conducting from the Cleveland Institute of Music and two bachelor’s degrees from Baldwin Wallace University.