Paul Jacobs is helping the King of Instruments retake its rightful place in classical music. The Kansas City Symphony is presenting “Mozart’s Requiem,” featuring Guilmant’s Symphony No. 1 with Paul Jacobs at the console of the Julia Irene Kauffman Casavant Organ on Oct. 20-23  in Helzberg Hall at the Kauffman Center for the Performing Arts. Tickets from $30. Call the Box Office at (816) 471-0400 or select your seat here. Best availability is on Thursday, October 20.

Tell us about yourself. When did you start playing organ? When did you know you wanted to be a professional musician?
I began with the piano at age 5, but didn’t start organ lessons until I was 12 years old, a situation that isn’t uncommon, as the organ is considered an unusual instrument. Things went rather quickly, though, after that; I had my first professional music job at 15, when I was appointed head organist of the church in my hometown of Washington, Pennsylvania, with a congregation of 3500 families. Getting to play the organ so regularly for many people brought me a sense of accomplishment, and I sensed early on that the joy of the organ literature and of playing for others would be my life’s work.

You’ll be performing Alexandre Guilmant’s Organ Symphony No. 1 with the Kansas City Symphony for the opening weekend of our Classical Series. What do you love about the work? What do you want audiences to know about the piece?
I’m looking forward to bringing the Guilmant Organ Symphony to the Kansas City audience.  This might be the first organ symphony a number of audience members are hearing live, and it happens to be a grand, popular work; Alexander Guilmant was a prolific composer and organist, whose many accomplishments included giving 40 recitals in 1904 on the
largest organ in the world, the St. Louis Exposition Organ, now preserved as part of the Wanamaker Organ in Philadelphia.

How does the Julia Irene Kauffman Casavant Organ compare to other organs you play? What is the process for becoming acquainted with an instrument when you travel?
The Kauffman’s Casavant Organ is a magnificent instrument. It’s a pleasure to play in this great hall, especially, since the room in which an organ is housed acts as the ‘resonator’ for the instrument. This instrument possesses a fine mechanical action, which offers quite
a bit of nuanced control over the sound emanating from each organ pipe. The process for becoming acquainted with an organ is much more complex than most people realize. I spend many hours adjusting the registration of the organ, learning the sound, making sure I can
master the sound I’m creating.

Who are your top three favorite composers and why?
It’s impossible to choose. This varies from day to day, depending upon many factors.  Of course, I share the sentiment of the German Romantic composer Max Reger, who said, “Bach is the Alpha and Omega of music.”

What do you like to do in your free time?
I don’t get a lot of free time between practicing, performing, and teaching at Juilliard, but when I do have some time, I love to go outside and explore nature. I try to take long walks, during which time I think about music and sometimes locate a quiet spot to read. Living in New York City, I think it’s important to get away every once in a while, even if it’s just to spend an hour in Central Park or to visit one of the many museums.

Is there anything you’re looking forward to doing while you’re in Kansas City outside of the concert hall?
I’ll spend a lot of my time in Kansas City in the concert hall working with the organ, but I’m hoping to visit the Nelson-Atkins Museum and a few others sites. Plus, I look forward to enjoying a nice steak dinner, and maybe some tasty barbecue.

What are other highlights of your 16/17 season?
I just gave a recital at Lincoln Center’s Paul Hall, and performed in the season opener of the Cleveland Orchestra. I also have performances with the LA Phil, the National Symphony Orchestra, the Philadelphia Orchestra, the Montreal Symphony and the Edmonton Symphony. I’ll also join the Chamber Music Society of Lincoln Center for a performance in Alice Tully Hall. Later in the season, I’ll return to the Oregon Bach Festival to perform and to direct the Organ Institute.

Where are you headed next after Kansas City?
I’m headed back to New York to prepare for upcoming performances with the Philadelphia Orchestra, where I’ll have the unusual honor of playing in all three works they’re presenting — the highly virtuosic Toccata Festiva by Samuel Barber, the world premiere of an organ concerto by Christopher Rouse, and, after intermission, the organ work that is probably best known to audiences: Saint-Saëns’ “Organ” Symphony, which I was scheduled to perform with the Orchestra last February with Maestro James Levine of the Met, but unfortunately the
performance was cancelled. Now it has been rescheduled, and the orchestra’s Music Director, Maestro Yannick Nézet-Séguin will be conducting. 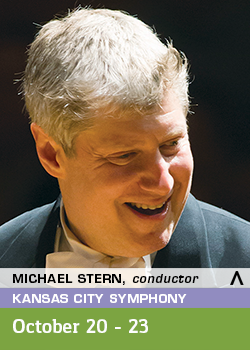 Don’t miss our next classical concert, “Mozart’s Requiem,” featuring Guilmant’s Symphony No. 1 with Paul Jacobs  at the console of the Julia Irene Kauffman Casavant Organ on  Oct. 20-23 in Helzberg Hall at the Kauffman Center for the Performing Arts. Tickets from $30. Call the Box Office at (816) 471-0400 or select your seat here. Best availability is on Thursday, October 20.